Who is Johan De Belser

Johan De Belser received the microbe from his father Victor, who in turn got it from grandfather. He was really born in a “pigeon nest” and has been racing pigeons for the biggest part of his life. It was during this period that the game of speed reigned supreme. Dad “Victor” was a remarkable speed player all his life and this translated into winning many champion titles, mainly in the local society of “De Verbroedering Berlaar-Heikant”.

1966 As the twig is bent the tree is inclined 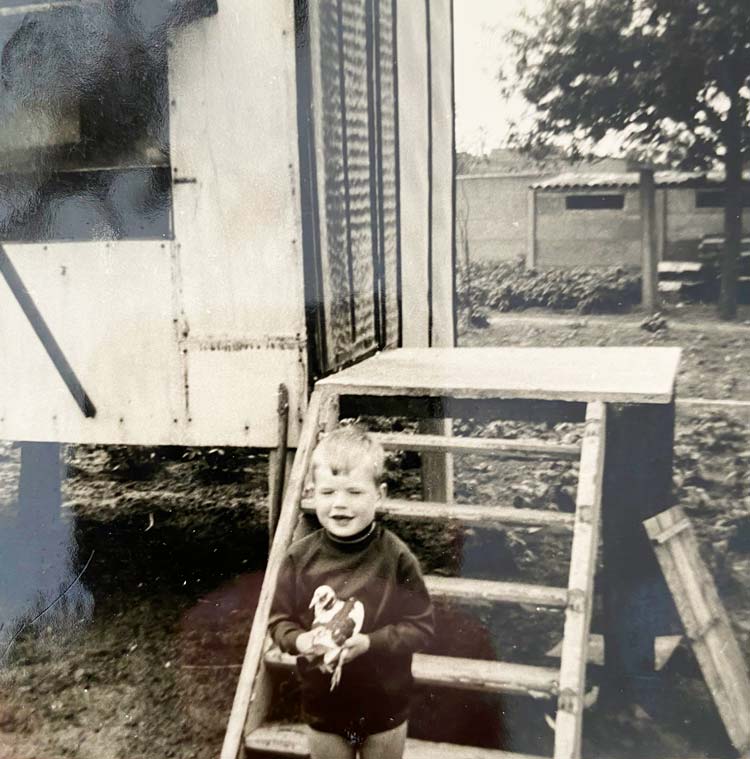 Bitten by the pigeon microbe from childhood

Johan has been interested in pigeon sport from an early age ... 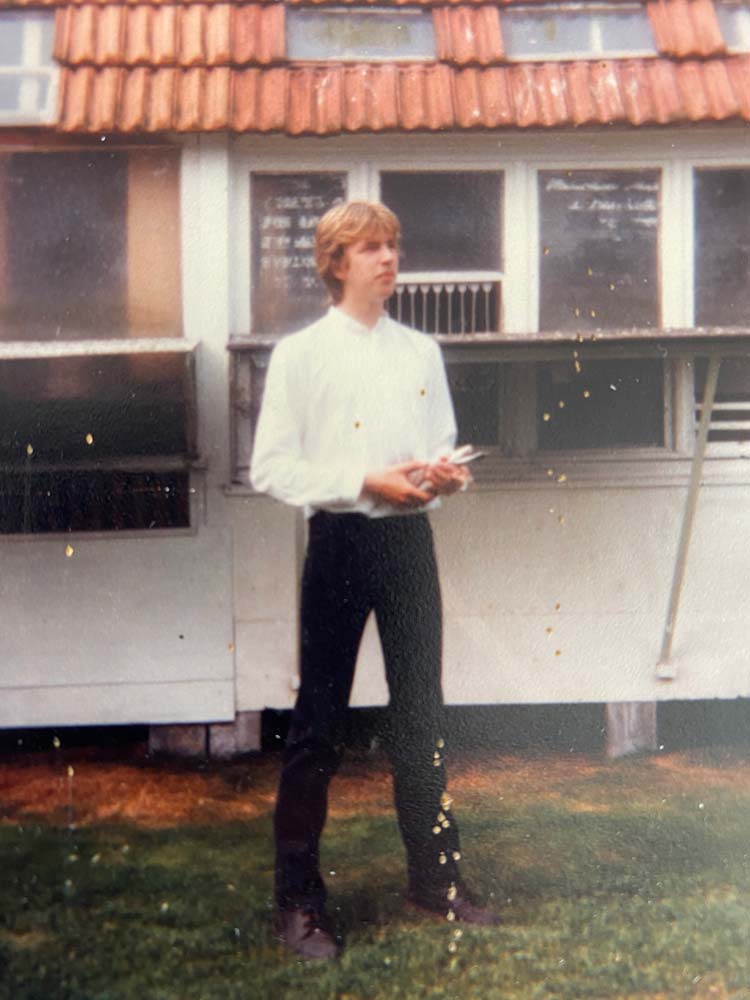 In the beginning Johan was already dreaming of a wonderful pigeon career. 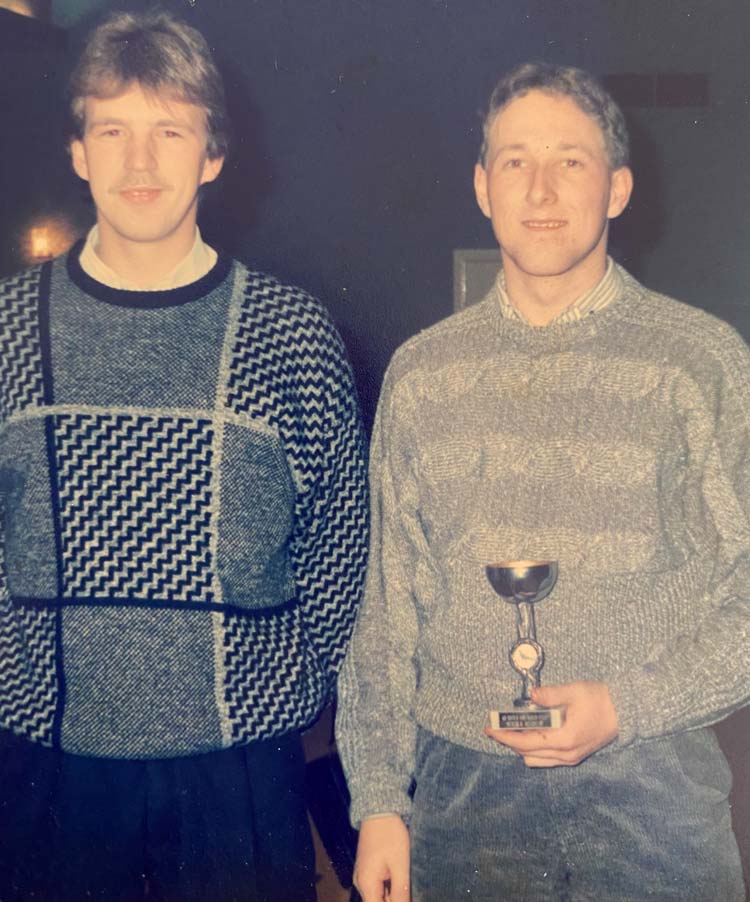 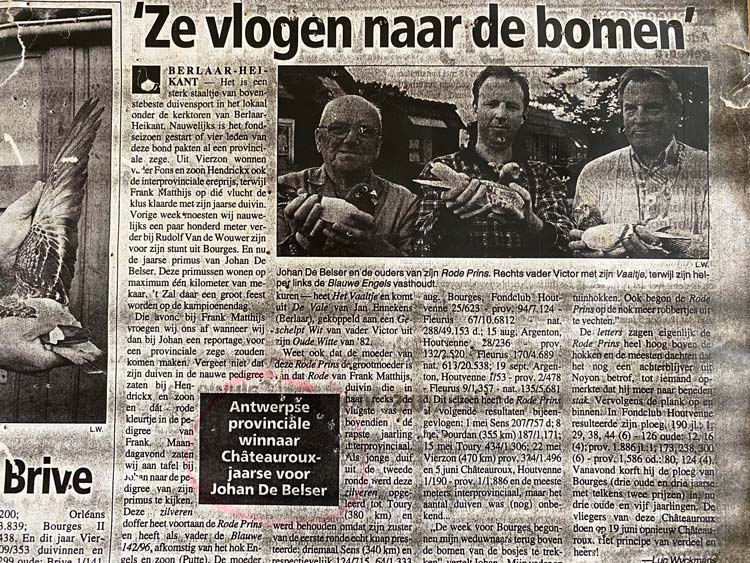 The first provincial victory is a fact. It was a very tough Chateauroux. 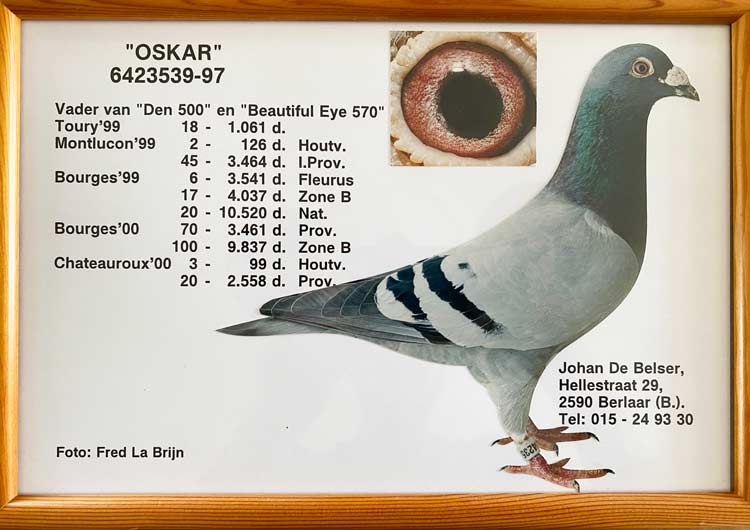 "Oskar" is the patriarch of the entire colony "De Belser Johan" 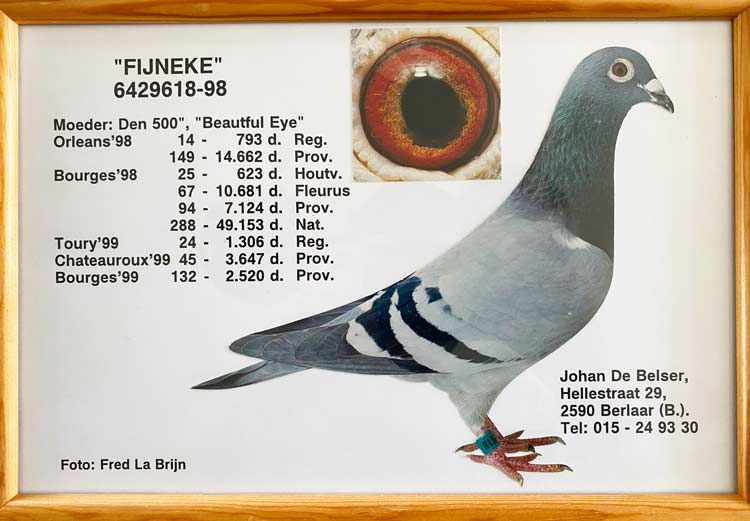 "Fijneke" was the best young bird of 1998. Together with "Oskar" they are the patriarchs of the loft "De Belser Johan" 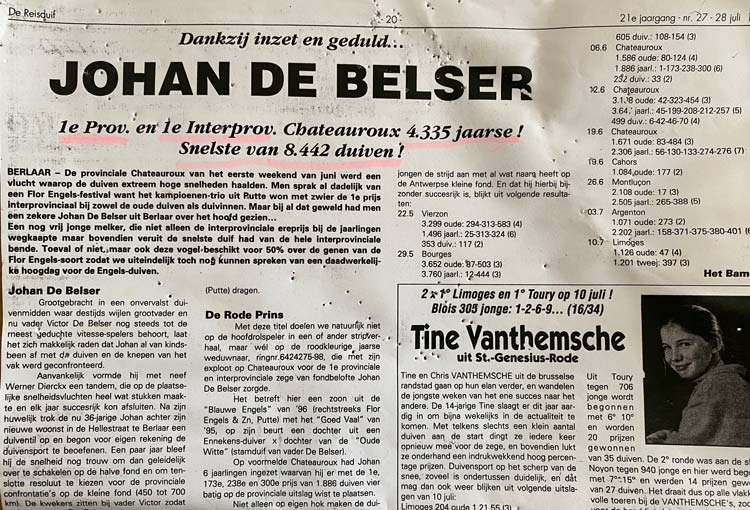 Interprovincial victory Vierzon with the yearlings 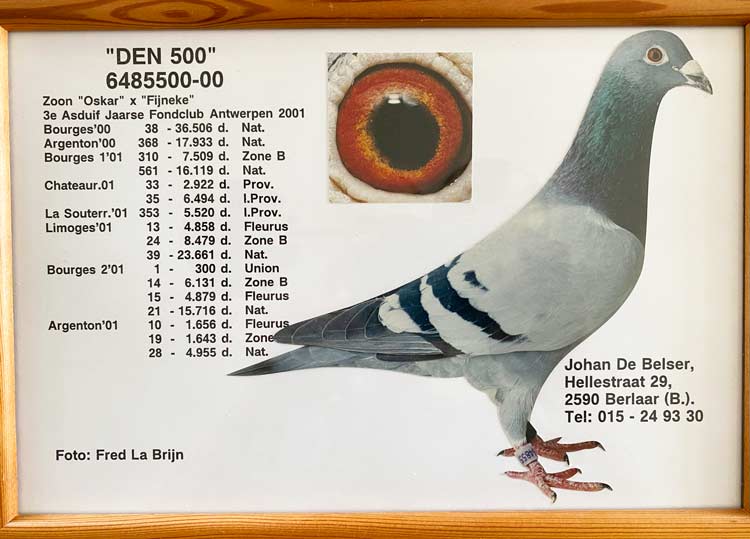 This pigeon is a son of our ancestor couple "Oskar x Fijneke". Together with his nest brother "Goldwin" are they the patriarchs of our loft. 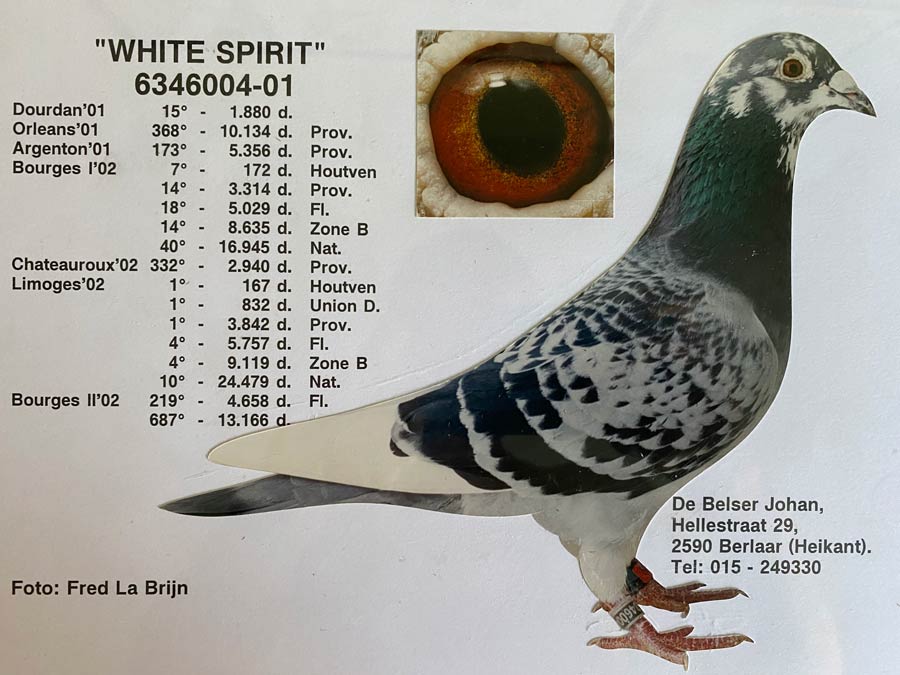 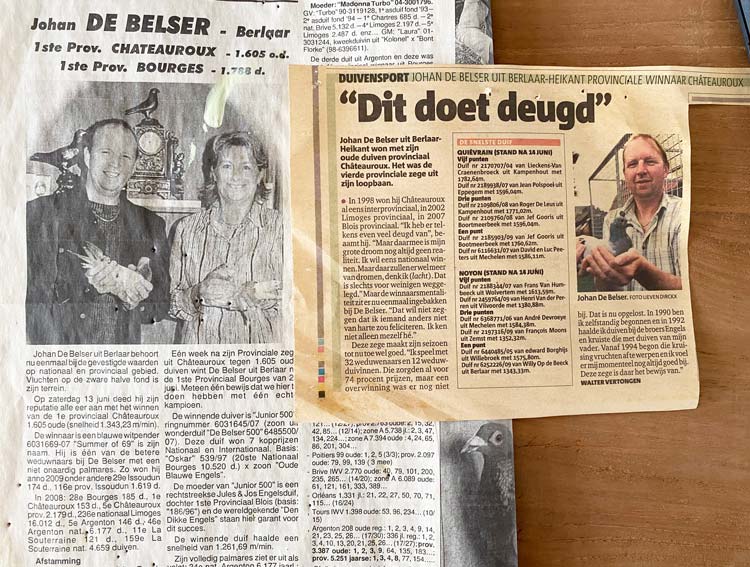 2 provincial victories in 1 weekend. Our pigeons were in top shape! 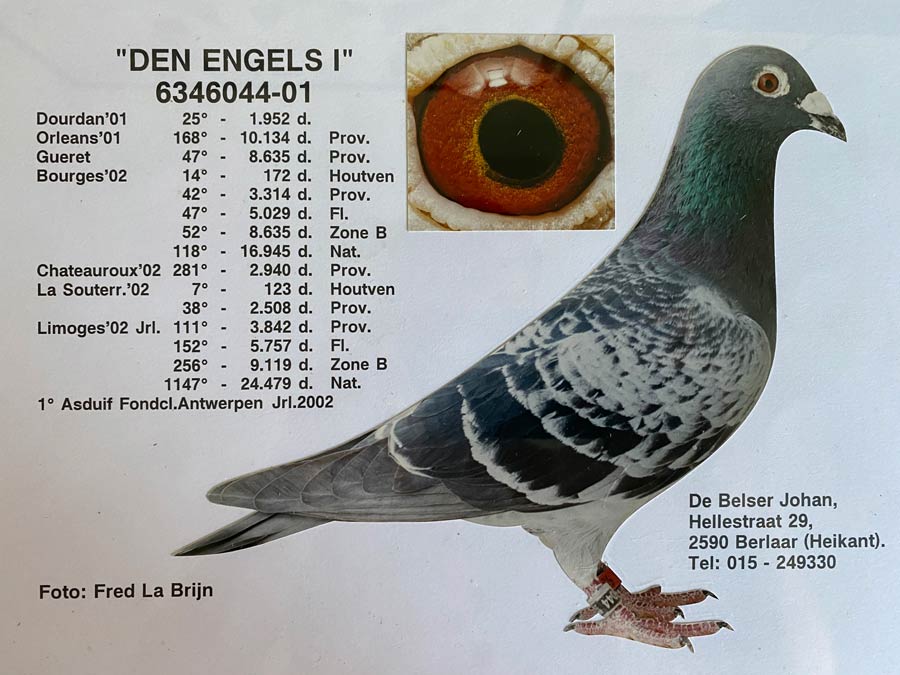 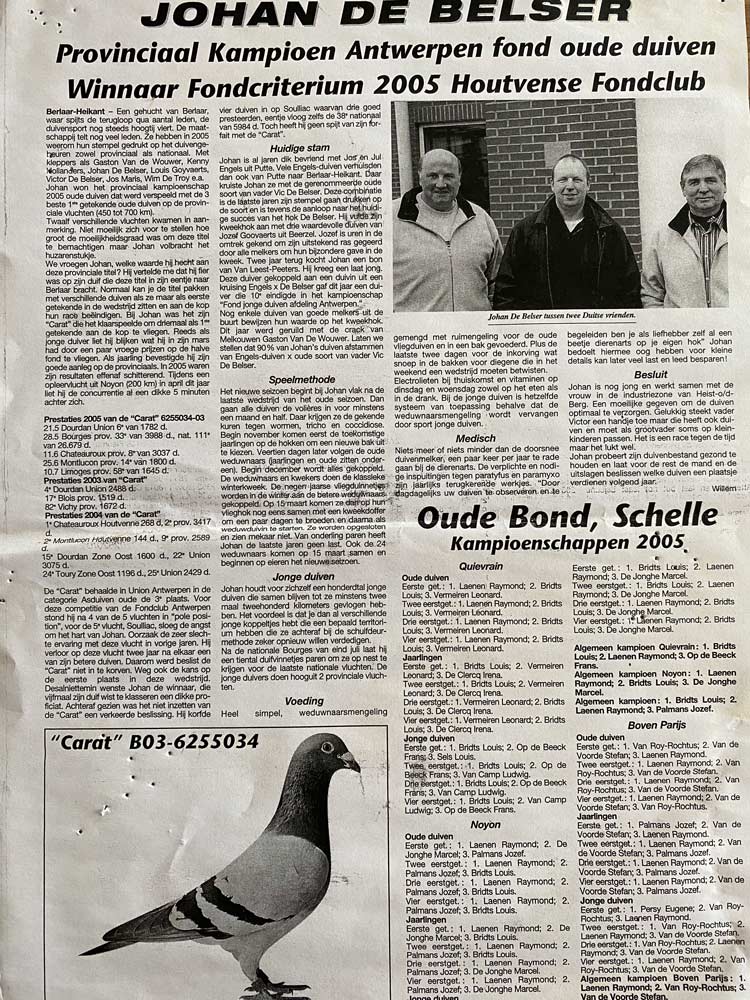 Good results give good championships. Ranked among the best in the province of Antwerp. 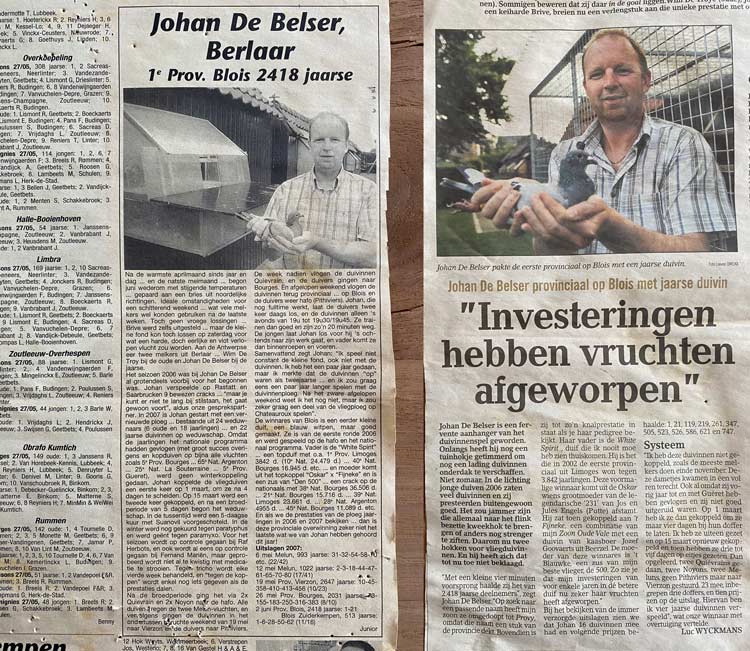 Another provincial victory, counter is already at 5! 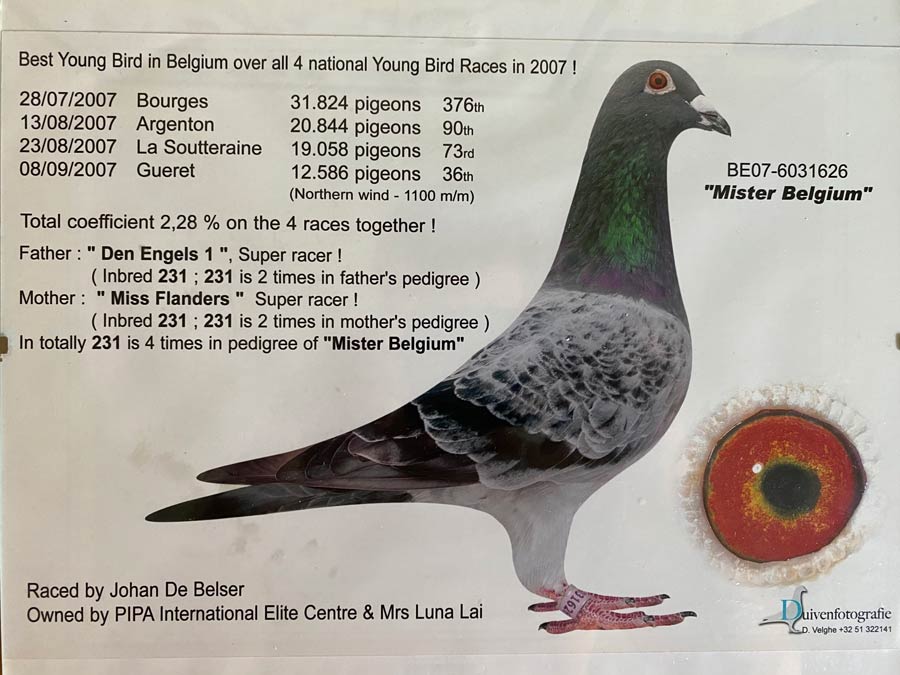 "Mister Belgium" becomes the best youngster in the 4 national races for youngsters. Ending with a total coefficient of 2.28%. This is a wonderful pigeon! 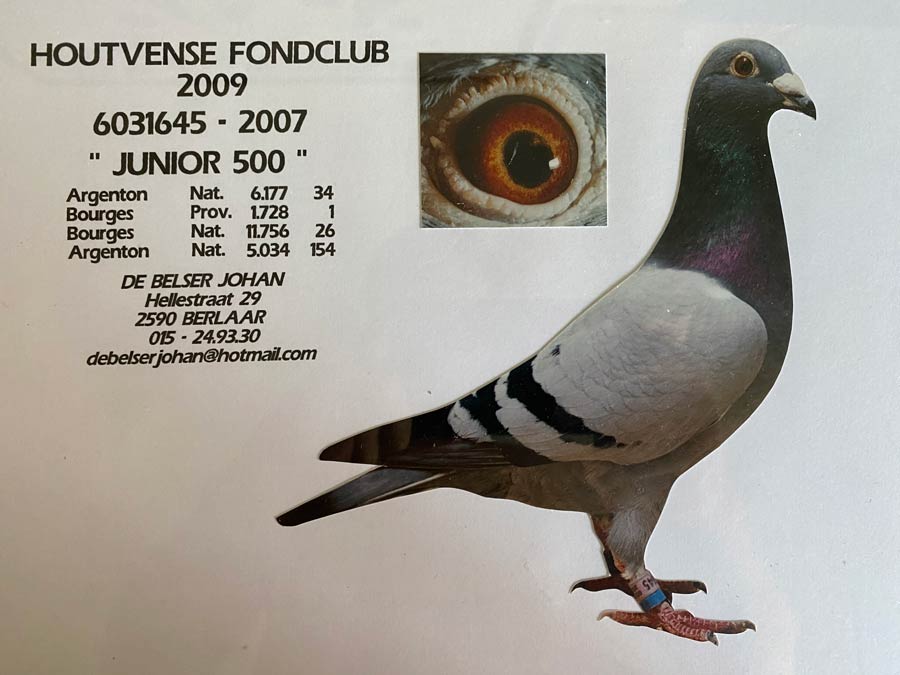 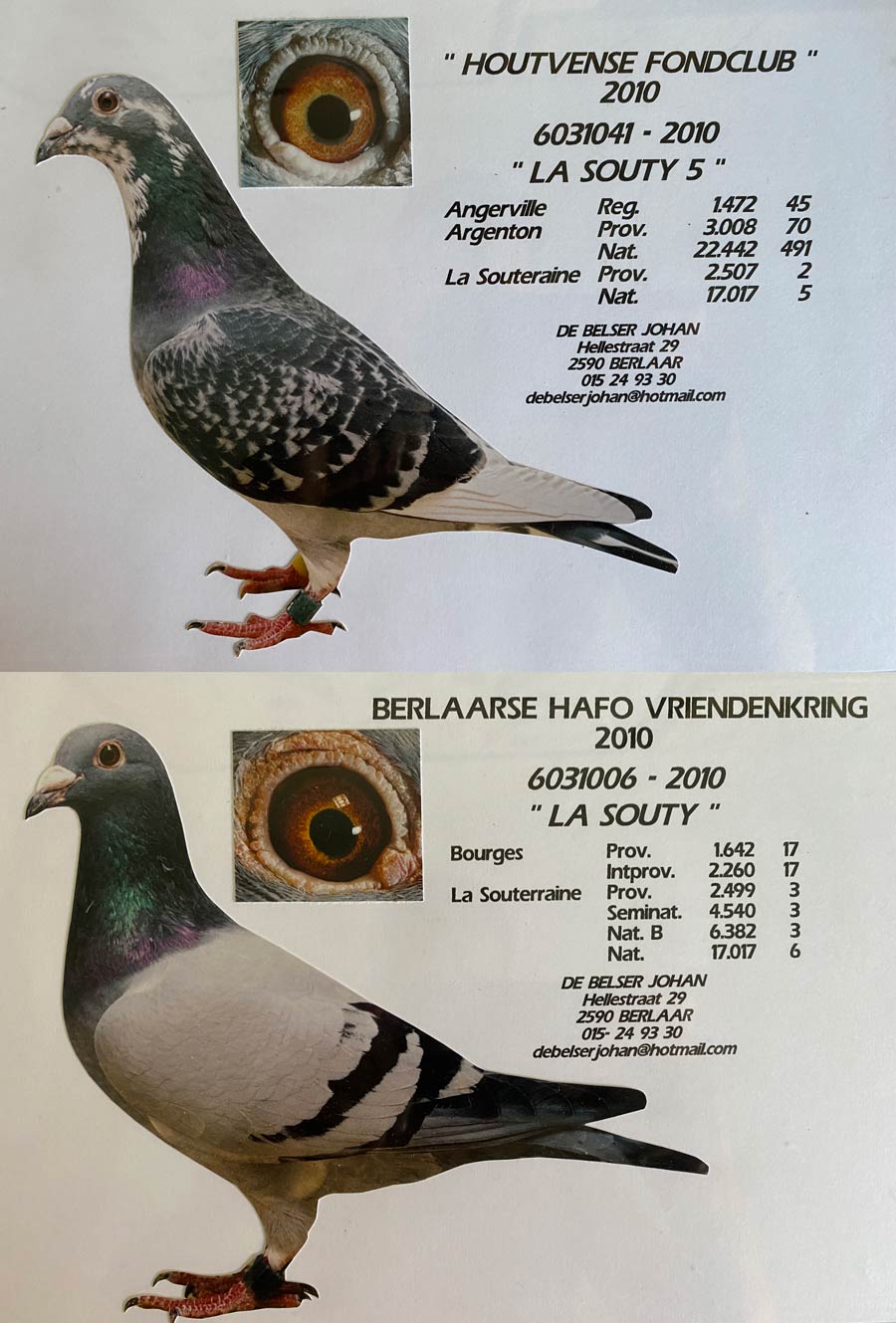 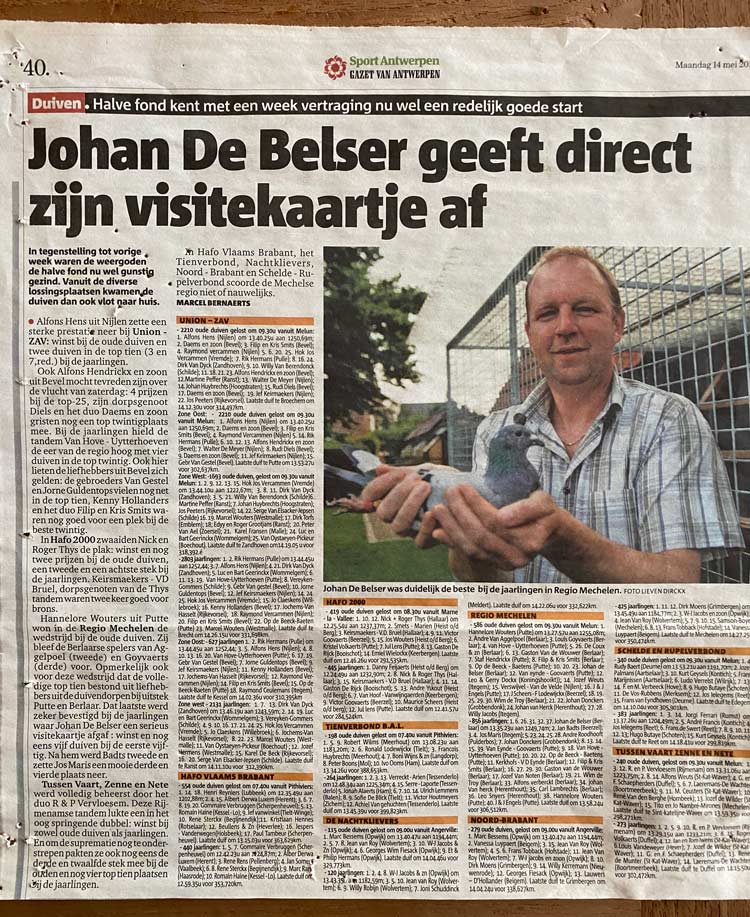 The pigeons also achieved good results on the short middle distance flights. This in training for the national flights. 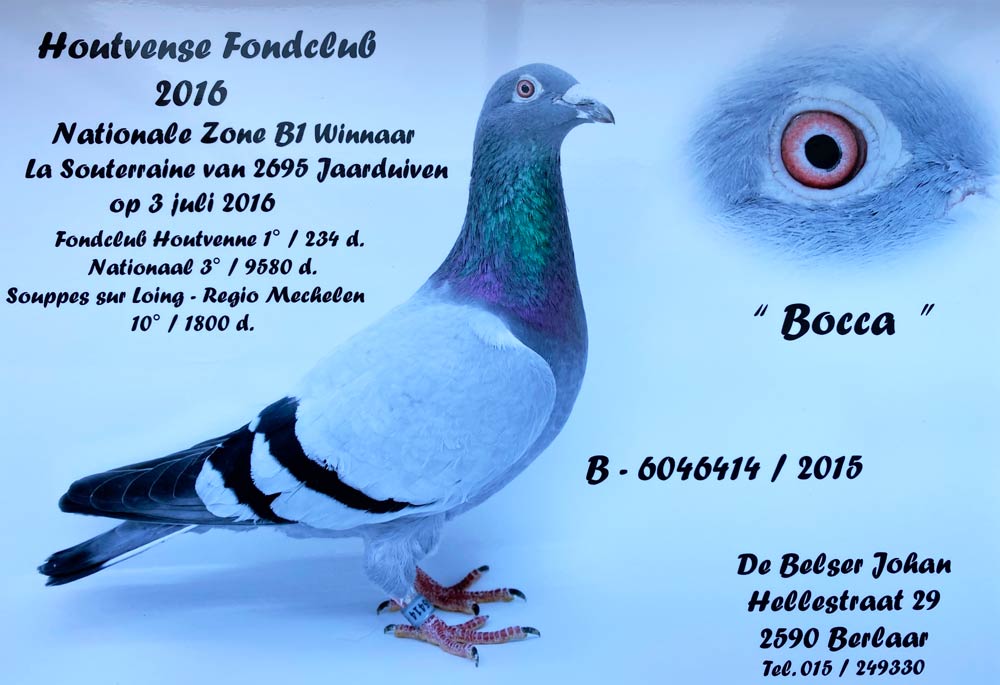 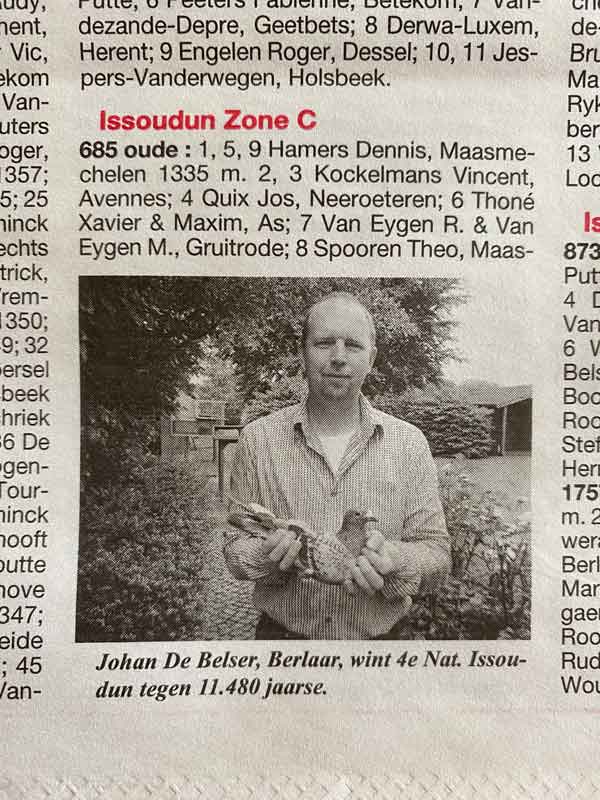 The flights between 450 and 650 km are the best terrain for the "De Belser pigeons" with numerous top prizes. 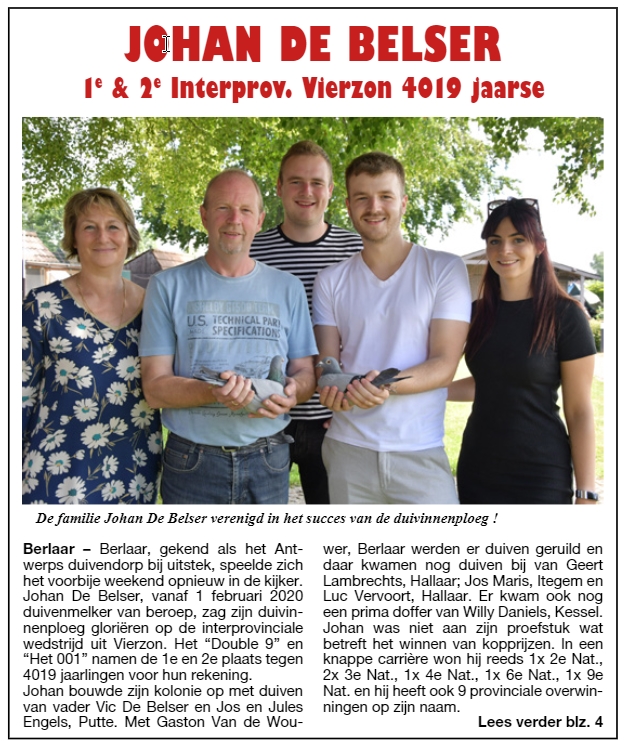 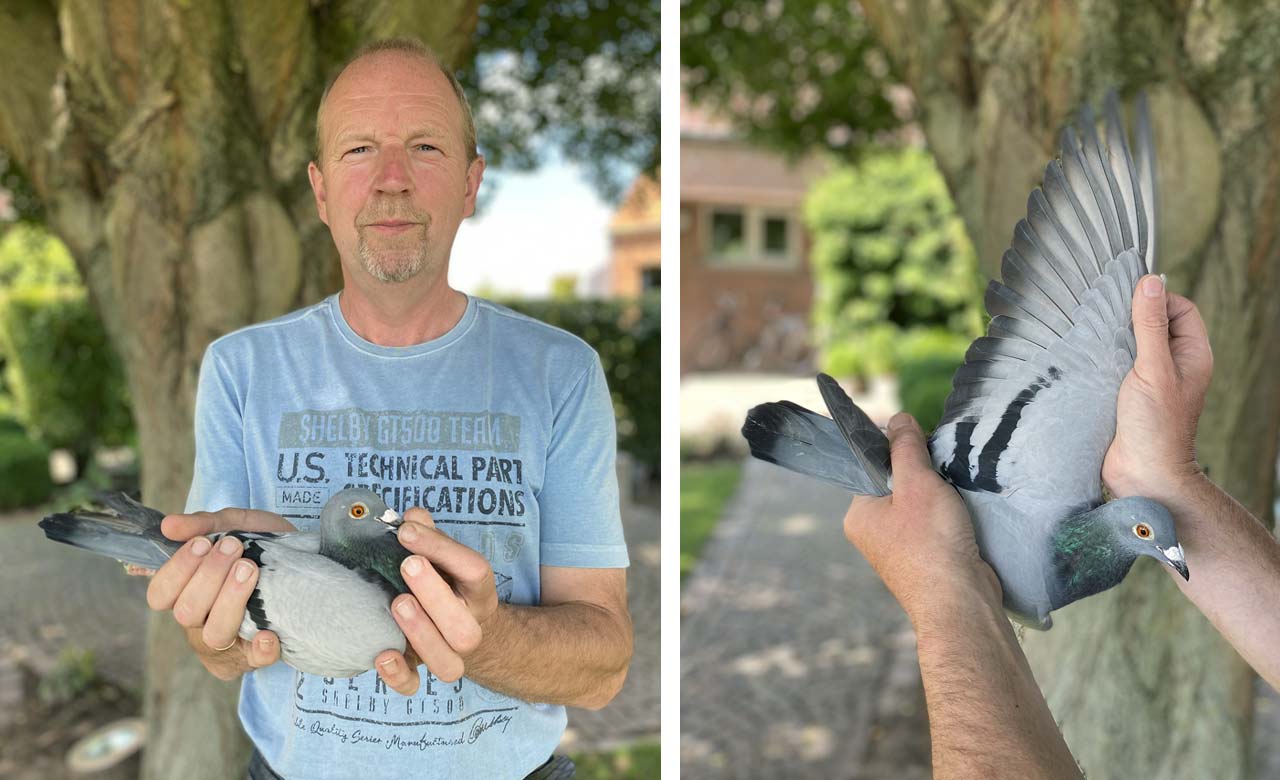 Read all about it here:

Johan’s grandfather died in 1979. Johan then decided to continue playing in the same lofts together with his cousin Werner Dierickx. They had some outstanding pigeons, the “Oude Blauwe” became ace pigeon on Noyon for 5 years.

Through frequent contact with half and long distance players, his interest in these flights grew. This led to Johan making the transition to these flights over time.

After his marriage a beautiful villa was built, with of course .. lots of pigeon lofts. Johan lives “in the countryside”, as is often said here in Belgium. During the first 2 years, only speed “Vitesse – Dutch” was played, but the longer distances beckoned. First half-distance but soon the distances became longer & longer. Especially Bourges from the end of July is the classic in which everyone from the Berlaar region wants to participate. Every year there are toppers with old, yearling and youngsters.

Here and there he bought pigeons for the heavier work so that now only the longer middle distance and long distance are raced. 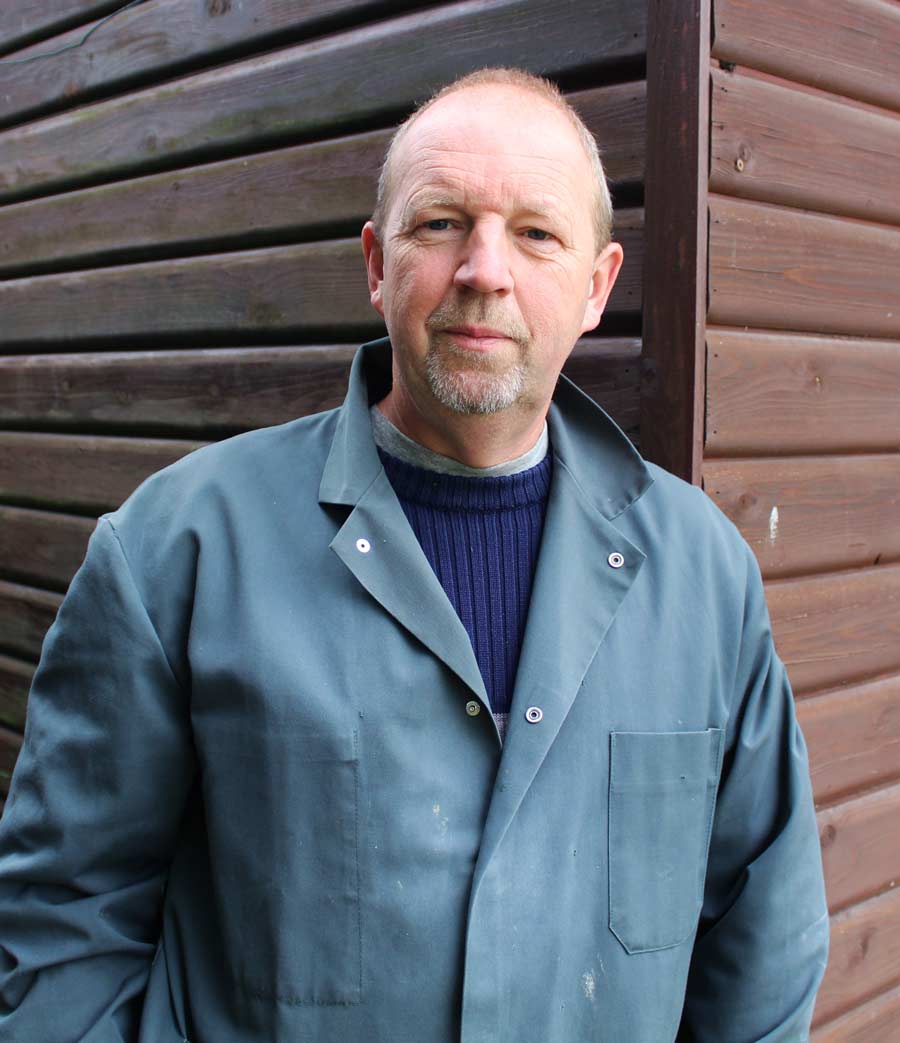